Moving to Mars? A Panel Discussion on the Ethics and Logistics

Moving to Mars? A Panel Discussion on the Ethics and Logistics 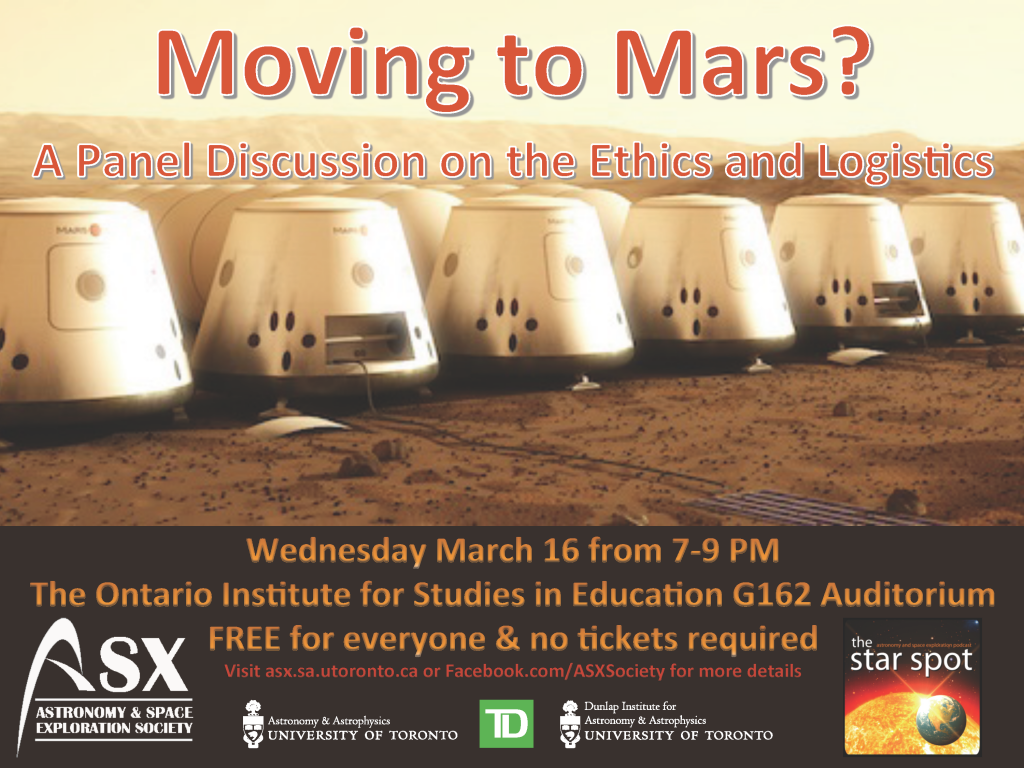 Panelist 1: Professor Paul Delaney, Senior Lecturer of the Department of Astronomy and Physics at York University
Bio: Paul Delaney received his B.Sc. from the Australian National University in Canberra, Australia, and his M.Sc. from the University of Victoria, British Columbia. He worked as a nuclear physicist for Atomic Energy of Canada, and was a support astronomer at McGraw Hill Observatory in Arizona. He is a Senior Lecturer at the Department of Physics and Astronomy at York University where he is the Astronomical Observatory Coordinator, and is Director of the Division of Natural Science. He is a passionate educator, and delights in discussing the wonders of the universe with people of all ages. He coordinates an extensive astronomy Public Outreach program and hosts the internet radio program “YorkUniverse” (on astronomy.fm). He has been the recipient of York University’s Faculty of Science and Engineering Teaching Award, a ‘top 10’ finalist in TV Ontario’s Best Lecturer competition, the recipient of the University Wide Teaching Award, the winner of the Royal Canadian Institute’s Sanford Flemming Medal, and the recipient of the Qilak Award from the Canadian Astronomical Society.

Panelist 3: Olathe MacIntyre, Postdoctoral Fellowship in the School of Engineering at the University of Guelph
Bio: Olathe MacIntyre’s B.Sc. in Biology at Dalhousie University and research at a wastewater treatment greenhouse lead her to realize closed-loop systems could mitigate human environmental impacts and ensure food and water security. Her study of closed-loop systems in the context of space colonization inspired her to pursue astronaut training. After working as an Onboard Marine Biologist in Alaska, she completed her M.Sc. in Space Science at the International Space University in France, and co-authored “Visysphere Mars: Terraforming Meets Engineered Life Adaption.” She received an internship at the world-class Controlled Environment Systems Research Facility at the University of Guelph, where she earned a Ph.D. in Environmental Sciences. Her thesis explored the implications of hypobaric conditions for plant-microbe interactions in a Lunar or Martian greenhouse. A Postdoctoral Fellowship in the School of Engineering at the University of Guelph in the area of water and wastewater treatment followed and she is currently with Science North inspiring the next generation of scientists with space exploration.

Panelist 6: Dr. John Rummel, Senior Scientist with the SETI Institute and a Visiting Scholar at McGill University’s Institute of Air and Space Law
As a retired Professor of Biology at East Carolina University, he has been a member of the NASA Advisory Council’s Planetary Protection Subcommittee and a planetary protection advisor for Mars One. He is the former (founding) Chair of COSPAR’s Panel on Planetary Protection. He previously worked at NASA Headquarters, both as Senior Scientist for Astrobiology and as Planetary Protection Officer, and served as NASA’s Exobiology Program Manager and Research Program’s Branch Chief in the Life Sciences Division. A holder of eight NASA Group Achievement Awards, he is also a Fellow of the American Association for the Advancement of Science, and has received both the Life Sciences Award from the International Academy of Astronautics and the NASA Exceptional Performance Award. He received his PhD in community ecology and evolution from Stanford University, and his undergraduate degree in environmental biology from the University of Colorado.

The moderator for this discussion will be Justin Trottier, the co-founder of ASX, host of The Star Spot podcast, and a passionate advocate of space advocacy, critical thinking, and scientific literacy. More information about The Star Spot can be found on their website, http://starspotpodcast.com/.

This event will be recorded live. So even if you cannot make it out with us, you can still look forward to watching this event online!