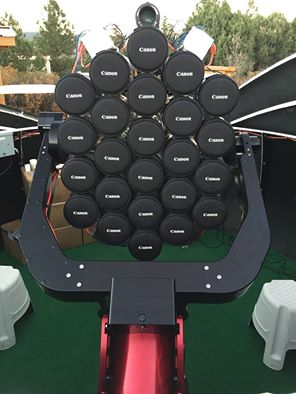 “Exploring the Ghostly Side of Galaxies with Dragonfly”, presented by Dr. Roberto Abraham

Abstract: Bigger telescopes are usually better telescopes…. but not always. In this talk I will explore the ghostly world of large low surface brightness structures, such as galactic stellar halos, low-surface brightness dwarf galaxies, and other exotica such as supernova light echoes. These objects are nearly undetectable with conventional telescopes, but their properties may hold the key to understanding how galaxies assemble. I will describe why finding these objects is important, and why it is so devilishly difficult.

About the Speaker: Roberto Abraham is a Professor in the Department of Astronomy and Astrophysics at the University of Toronto. He obtained his BSc from UBC and his doctorate from Oxford. His work is focused on observations of galaxy formation and evolution and the development of innovative instruments. He has been awarded the Canadian Astronomical Society’s P. G. Martin Award, the Canada Foundation for Innovation Career Award, the NSERC Steacie Fellowship, a Premier’s Research Excellence Award, the University of Toronto Outstanding Teaching Award, and a bunch of other things, including recently becoming a Fellow of the Royal Society of Canada, thus making him officially over the hill.

His proudest moment is winning second prize in the Vancouver All-City Elementary School Grade 6 spelling bee, where he lost out for not knowing how to spell the word “satellite”, leading eventually to learning how to spell the word “ironic”. He’s presently Vice-President of the Canadian Astronomical Society. Being keen on outreach, he has served as Honourary President of the Toronto Centre of the RASC for many years. He is currently serving on the Board of Directors of the Gemini Observatory, on the Science Advisory Committee for the Thirty Meter Telescope, has advised NASA by serving as panel chair on the Hubble Space Telescope time allocation committee three times, and is currently by serving as Canada’s representative on the James Webb Space Telescope Advisory Committee.