Here is a list of links to our previous events, which can be found on our Youtube channel: Astronomy and Space Exploraton Society

Most of the mass in the Universe exists in the form of dark matter, an enigmatic substance connected to “normal” matter only through the force of gravity. As a result, the properties of the dark matter particle and its production mechanism remain a mystery. In my talk, I will review the compelling evidence for the existence of dark matter, and describe what we have learned by analyzing visually spectacular strong gravitational lenses.

Astrophysicists and cosmologists have been developing the technique of line-intensity mapping to observe the light from various species of atomic and molecular gas that permeate these galaxies, and to thus obtain a three-dimensional picture of the large-scale structure of luminous matter throughout cosmic history. This talk will consider the scientific background behind a range of line-intensity mapping surveys, and how using such surveys to map a variety of spectral lines should help shed new light on the early cosmic history of stars and galaxies.

Link to Video: Mapping the Milky Way in the Age of Gaia
Date: October 29 2021

For as long as we have kept records, humans have argued about the nature of the lights in the night sky. We now know that many of these are stars inside our own galaxy — the Milky Way — as well as galaxies outside of our own. While we can directly observe what other galaxies look like, we still have only a rough picture of what our own galaxy looks like for one simple reason: we are currently embedded within it! In this talk, I will first describe some of the history behind the discovery of the Milky Way and discuss why it’s so difficult to piece together what our own Galaxy looks like. I will then talk about how modern surveys of stellar light like Gaia are revolutionizing the field and the new pathways they have created to tackle these problems.

Link to Video: Infrared Eyes on the Universe
Date: January 25 2022

As the flagship successor to NASA’s Hubble Space Telescope, the James Webb Space Telescope (JWST) will allow us to see further into the universe than ever before. JWST is NASA’s most ambitious and complex space observatory to date, with a large segmented mirror and a host of advanced new technologies. These technologies allow it to operate at infrared wavelengths much longer than those to which Hubble is sensitive, allowing JWST to see through the dust-enshrouded universe and learn about the first stars and the birth of planetary systems. In this talk, Dr. Law will give an overview of the JWST project and preview some of the exciting science that is likely to come from its first year of observations.

Researchers at the frontier of space research and exploration are set to speak at the Astronomy and Space Exploration Society’s 18th annual symposium — themed “Stellar Spectacles: Peering into the Cosmos with Telescopes, Neutrino Detectors, and Gravitational Waves.”

As astronomers, we live in a golden era for the search for and the characterization of other worlds. The discoveries of the last thirty years have profoundly changed our view of planetary and stellar formation. The likely future detections of bio-signatures in exoplanetary atmospheres will scientifically and even philosophically revolutionize our understanding of the formation and evolution of life. From this unique perspective, the role of observation for the detection and characterization of exoplanets is crucial to extend our in-depth understanding of the formation and evolution of physico-chemical properties (structure internal and atmospheric) of giant and telluric planets, but also the diversity of planetary architectures, the origin of our Solar System, and the emergence of life. The development of new technologies, instruments and observational strategies has consistently led to key discoveries going beyond what we could imagine. In that perspective, we are about to open a new page of modern astronomy with the advent of the Ground-based Extremely Large Telescopes that will have their first light in the coming years. They will soon open a new astronomical horizon to directly explore the cradle of planetary formation, the demographics of giant and telluric exoplanets, the diversity and composition of exoplanetary atmospheres, and ultimately lead to the discoveries of the first possible bio-signatures. In this talk, I will briefly come back to the key technological milestones and breakthrough discoveries of the past decades in the specific context of the direct imaging and spectroscopy of exoplanets. I will then present the main scientific programs driving the development of these giants and of their instrumentation roadmap that will operate and observe in concert with other ground-based facilities and space missions.

Link to Video: Gravitational Waves: What They Reveal About the Universe and How We Detect Them

Detections of gravitational waves (‘ripples in spacetime’) produced by colliding black holes and neutron stars in the past six years have produced startling revelations about the most violent events in the Universe. Beginning in late 2015 with the first direct detection of a merging binary black hole system, we are beginning to answer fundamental and long standing questions about the nature of black holes, neutron stars, gravity, and even how heavy elements are produced.

For the very first time, humanity is technologically present enough to perceive our future as a function of humanity’s own actions. We are stardust that contemplates other arrangements of stardust in space and we observe cosmological objects that are indifferent to an ever-changing universe. We have the tools to observe, image, and distribute images of space as public knowledge. This is not a practice solely for those who are studying astronomy and physics, but for all who desire to practice the human inevitability of curiosity.

This workshop will cover astrophotography at home, imaging using larger equipment, image analysis, the inception of the low-cost, homemade space camera Hoggcam, and the work of my coworkers and myself at the observatory.

Neutrinos are great messengers since they only interact weakly and travel with nearly the speed of light. They have taught us much about the sun, supernovas, and their fundamental properties, but there are still many open questions to be answered. In this presentation, I will explain the nobel prize winning SNO experiment, which clearly showed that neutrinos do oscillate and therefore have mass. The success of SNO enabled Canada to build SNOLAB, where a number of experiments focused on neutrinos and dark matter are hosted and planned to be hosted. I will give a bit of an overview and show details about the SNO+ experiment, which would like to answer the question if neutrinos are their own antiparticle. SNO+ can also see neutrinos from the Earth and a galactic supernova, should one occur while the detector is running.

Link to Video: Rise of a Giant: The Extremely Large Telescope

With a primary mirror of diameter 39m, the European Southern Observatory’s (ESO) Extremely Large Telescope (ELT) will be the “World’s Biggest Eye on the Sky” operating in the visible to infrared (IR) wavelength range. The ELT will collect 13 times more light than the largest visible/IR telescopes today allowing us to peer deeper and further in the Universe than ever before. Using novel technologies (including adaptive optics) to overcome the effect of the atmosphere, the ELT will be able to take images of the sky in exquisite detail, 16 times sharper than the Hubble Space Telescope. This deeper and finer view of the Universe will help to address many exciting open questions in contemporary astrophysics and cosmology, including the nature of extra-solar planets (see Gael Chauvin’s talk) and the first galaxies to form stars at the edge of the visible Universe. More excitingly, it will reveal many new discoveries, raising even more questions. In this talk, I will describe the major steps in telescope design that have led up to the forthcoming era of extremely large telescopes (ELTs) and some of the scientific questions they will address. The next decade will be extraordinary with facilities like the ELTs, the James Webb Space Telescope, the Vera C. Rubin Observatory, and the Square Kilometre Array (to name but a few) becoming operational. In this rich landscape, the ELTs will play a central role in delivering ground-breaking science contributing to our evolving understanding of the Universe. 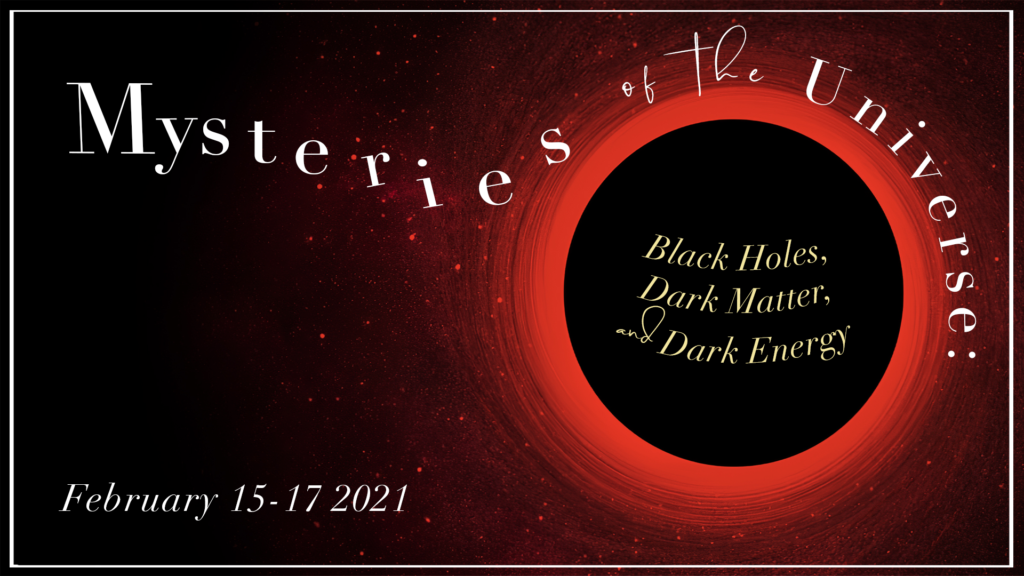 Edwin Hubble discovered in the late 1920s that the Universe is expanding. Over the past few years, though, increasingly precise measurements of the rate at which the Universe is expanding disagree. I will describe these measurements and the discrepancy between the rates returned by different techniques. I will then describe the implications for cosmology if these discrepancies persist.

For millennia, humans have looked to the sky in wonder of what lay beyond our minuscule grain of sand in the vast desert that is the universe. To them the distant stars were mere specks of light settled upon a moving blanket sheathing the sky, but of course, we have come a long way since then. From the history of astrophotography, to large equipment, to the tools you have laying around your home, I will immerse you into the world of imaging the absolute beasts of cosmological objects of which we are so fascinated.

Quantum theory is one of the pillars of 20th century physics: it successfully describes the dynamics of very small things, like electrons in a silicon chip and Higgs bosons in the LHC particle collider. Einstein’s general theory of relativity is another pillar: it successfully describes the dynamics of very heavy things, like planets, stars, and the entire cosmos. But at a deep theoretical level, these two theories are incompatible. This is a problem if we want to understand physical phenomena that are both very small and very heavy, like black holes and the big bang. To analyze their physics, we need a working theory of quantum gravity.

My research focuses on learning about quantum gravity by using techniques of modern string theory. I especially want to know precisely what happens to quantum information falling into black holes, and to resolve a famous paradox about this posed by Stephen Hawking forty-five years ago and refined by many other researchers since. To study such questions, I currently use a powerful theoretical laboratory known as AdS/CFT holography, whose discovery was one of the most important advances in theoretical physics in the past quarter century. No previous experience with any of these topics will be assumed and all are welcome.

Astrophysics PhD student Alex Laguë at the University of Toronto asks a panel of expert astronomers about dark matter and its contrasting theories. Participants ask their thoughtful, burning questions about dark matter in the concluding segment.

Einstein’s Monsters are regions of space and time excised from the rest of the universe. Black holes were predicted a century ago, and it took decades of research to show that they actually exist. More recently, astronomers have discovered black hole behemoths inside galaxies that range up to billions of times the Sun’s mass, and they have detected gravitational waves from black hole mergers. The talk covers progress in understanding black holes and mysteries that remain.