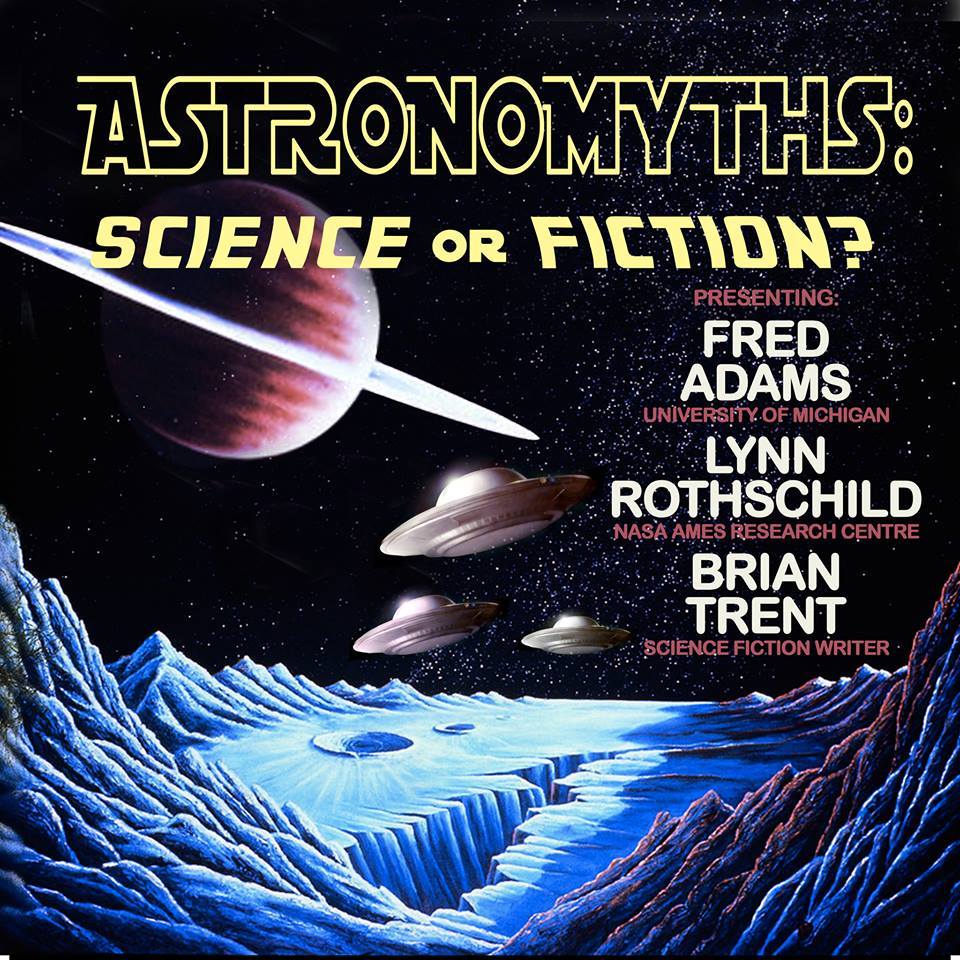 The wait is over; ASX is proud to announce our 13th Annual Symposium “Astronomyths: Science or Fiction?”! This 13th Annual Symposium will be held on January 29th, from 6:30 – 11:00 pm. In the past, this event has featured many famous astronauts, top researchers and leaders in the space industry, and it had attracted more than 1000 audience members.

As the title of this Symposium suggests, our speakers this year will tackle some aspects of cosmology and aliens while asking the question “is this science or fiction?”. We are honored to be featuring; Professor Fred C. Adams (cosmologist at the University of Michigan), Professor Lynn Rothschild (NASA AMES Research Centre) and Brian Trent (science fiction writer and  author of  “The Nightmare Lights of Mars”).

Professor Fred C. Adams
Abstract: After outlining the history of the universe, we consider the evolution of planets, stars, galaxies, and the universe itself over time scales that greatly exceed the current cosmic age. In many ways, this unfolding drama is stranger than fiction. In fact, science fiction writers have covered many of the same topics, and such work will be referenced alongside the scientific narrative. On this futuristic stage, our discussion follows stellar evolution and the transformation of stars into degenerate stellar remnants. These neutron stars, white dwarfs, and brown dwarfs inherit the universe after stellar evolution has run its course. Star formation continues at a highly attenuated rate through brown dwarf collisions. The galaxy gradually loses its stars by ejecting the majority, and driving a minority toward accretion onto massive black holes. As the galaxy disperses, white dwarfs accrete dark matter particles, which annihilate and keep the old stellar remnants relatively warm. These expelled degenerate stars evaporate through the decay of their constituent nucleons. After the white dwarfs and neutron stars have disappeared, black holes slowly lose their mass as they emit Hawking radiation. The largest black holes eventually evaporate, and then the universe slowly slides into darkness.

Professor Lynn Rothschild
Abstract: Each recent report of liquid water existing elsewhere in the solar system has reverberated through the international press and excited the imagination of humankind. We have come to realize that where there is liquid water on Earth, virtually no matter what the physical conditions, there is life. Dr. Lynn Rothschild, an evolutionary biologist known for her work on life in extreme environments and a founder of the field of astrobiology, tells us about intriguing new data. At NASA’s Ames Research Center in Moffett Field, CA, she leads a program in synthetic biology and works with researchers in industry, government agencies around the world and in academia, including at Brown and Stanford University. The prevalence of potential abodes for life in our solar system and beyond, the survival of microbes in the space environment, modeling of the potential for transfer of life between celestial bodies, and advances in synthetic biology suggest that life could be more common than previously thought. Are we truly “alone”?

Brian trent
Abstract: The notion of alien organisms predates the genre of science-fiction itself. As science searches for evidence that life exists beyond Earth, popular media has given us innumerable speculative examples of what that life may be like. But why do we picture extraterrestrials as we do? What does it say about our expectations, fears, and scientific projections? I will be discussing the categories and concepts of the “alien” in the history of science-fiction, and how the idea has changed along its journey of Enlightenment satires, pulp novels, genre classics, and silver screen renditions. Why the preponderance of “alien bugs” in literature? Is there a sound basis for depicting anthropocentric entities, or does Earth’s own biodiversity suggest a far more exotic likelihood? What did the finest minds in science-fiction think of how first contact might play out? Our discussion will break the subject into five categories of how alien life is depicted within a framework of historical, literary, and philosophical considerations. Very recent fanfare over KIC 8462852 and the Martian meteor controversy will also provide talking points into how popular the subject remains to this day, and how the search for life is focusing on our own solar system.

Students: FREE (with ID and pre-registration) from ANY university, college or school
Others: $16.51

As a last note, since this is a big event, we are looking for volunteers for the Symposium. If you are interested in participating in the planning of one of the largest events run at the University of Toronto, send us an email to space.society.utoronto@gmail.com, with subject line “Symposium Volunteering”. Let us know if you would like to help in a particular area (e.g promotions, program logistics, day of event tasks, etc).