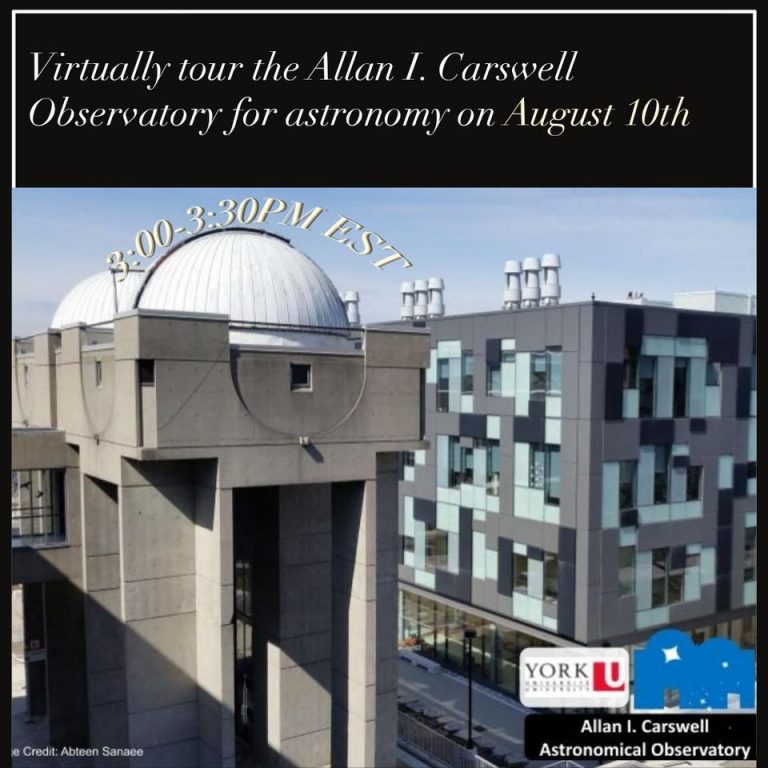 Learn about astronomical observation in a virtual tour of the Allan I. Carswell Astronomical Observatory on August 10th with the ASX! Catch the event page at: https://www.facebook.com/events/988126978649950 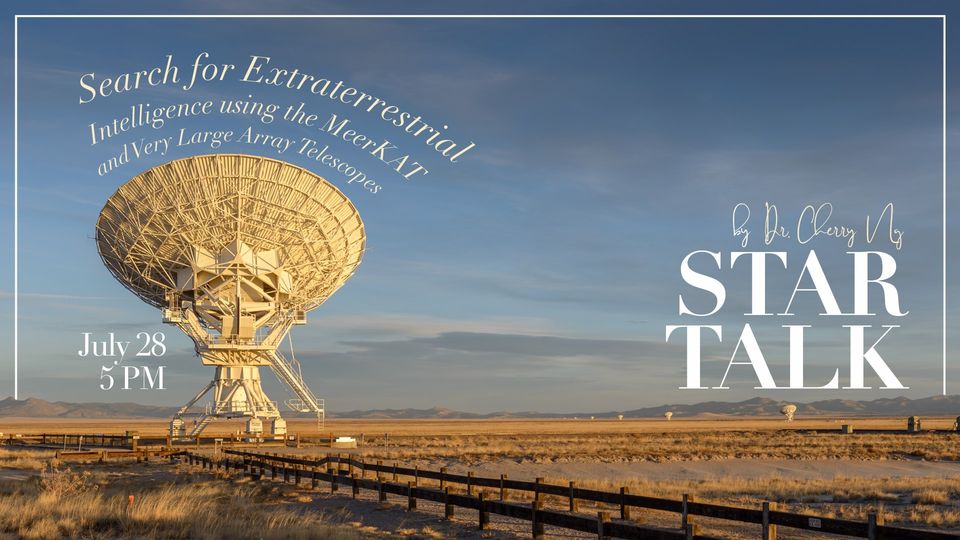 Catch our upcoming Star Talk with post-doctoral researcher Dr. Cherry Ng!
Zoom link: https://us06web.zoom.us/j/82145774799…
Passcode: startalk
Abstract: “The search for technosignatures – remotely observable indicators of advanced extraterrestrial life – addresses one of the most profound questions in science: are we alone in the universe as intelligent life?” writes Dr. Ng. “The Breakthrough Listen program is leading the most concerted search for extraterrestrial intelligence (SETI) effort to-date through radio and optical surveys of nearby stars, nearby galaxies and the Milky Way galactic plane, thus representing the best chance the human race has ever had to detect a technosignature.”
“Recently, Breakthrough Listen has partnered with the SETI Institute to develop commensal SETI search capabilities on some of the most sensitive radio inteferometers, including the Allen Telescope Array (ATA), the Very Large Array (VLA) and MeerKAT,” writes Dr. Ng. “Interferometric radio telescopes have the advantage of providing a larger field of view, maximizing the SETI survey speed. In this talk, we will present the latest updates on these surveys and conclude with a refreshed outlook on SETI search using next generation telescope facilities.”
Speaker biography: Dr. Cherry Ng is a post-doctoral researcher at the Dunlap Institute for Astronomy & Astrophysics, where she researchers pulsars and Fast Radio Bursts (FRBs).
0 Comments
Latest News

The Astronomy and Space Exploration Society is raising awareness and adjusting its programming to support an advocacy campaign to restrict donor influence on academic hiring decisions at the University of Toronto.

In 2020, the University of Toronto’s law school presented an offer to Valentina Azarova, a human rights lawyer in Germany, to serve as director of the university’s International Human Rights Program. Azarova accepted the offer in the August of that year. But the dean of the law school at the time, Edward Iacobucci, rescinded the hiring offer, shortly following a call from a major donor to the school, David E. Spiro, who allegedly suggested that hiring Azarova would damage the university’s reputation due to her academic work on the Israeli-Palestine conflict.

In response to the withdrawn hiring offer, the faculty at the University of Toronto who formed the hiring committee—beginning with Audrey Macklin, law professor and the committee’s chair—resigned from their posts. Human rights groups, including the Human Rights Watch and Amnesty International, have since publicly spoken out against the law school’s course of action. These events have made headlines in The Globe and Mail, the Toronto Star, and the New Yorker.

The University of Toronto has since released a report that concludes, from a legal perspective, that it is not certain that the hiring decision was reversed due to donor influence. However, a blow-by-blow account by Higher Education Strategy Associates, a Toronto consultancy, concludes that even with this benefit of the doubt, the official reason for reversing the decision remains “flimsy.”

𝗪𝗵𝗮𝘁 𝘁𝗵𝗶𝘀 𝗺𝗲𝗮𝗻𝘀 𝗳𝗼𝗿 𝘁𝗵𝗲 𝗔𝗦𝗫: The ASX supports the CAUT’s move to curtail the influence of donors on the hiring of academic faculty at the University of Toronto.

The ASX is moving to raise awareness of the issue with this letter, hold all events off-campus (including University of Toronto-affiliated Zoom accounts), and avoid inviting speakers not affiliated with the University of Toronto at present. The ASX will also inform all potential speakers about the censure. These decisions are grounded on guidance from the CAUT, the David A. Dunlap Department of Astronomy and Astrophysics, and the ASX’s independent research. While supporting this campaign, the ASX remains committed to running the highest-quality events in astronomy outreach and education for the public.

We believe that support for this campaign is in the best long-term interest of the community that attends ASX events, in support of freedom in academic research at the university. The ASX will be back with an update on the CAUT campaign in October, to present potential changes or implications for the ASX’s annual Symposium. Thank you for your consideration of this letter. How are astronomers investigating dark matter by analyzing gravitational lenses? Learn more at the ASX’s upcoming Star Talk on June 28 at 5 pm with Dr. Daniel Gilman, Postdoctoral Fellow at the University of Toronto’s David A. Dunlap Department of Astronomy & Astrophysics.

Star Talk Abstract: “Most of the mass in the Universe exists in the form of dark matter, an enigmatic substance connected to ‘normal’ matter only through the force of gravity,” writes Dr. Gilman. “As a result, the properties of the dark matter particle and its production mechanism remain a mystery. In my talk, I will review the compelling evidence for the existence of dark matter, and describe what we have learned by analyzing visually spectacular strong gravitational lenses.”

“Gravitational lensing refers to the deflection of light by gravitational fields, and strong lensing refers to a particular case where the extreme deformation of space by a massive foreground object produces multiple highly-magnified and distorted images of a luminous background source,” he continues.

“I will review how strong lensing provides insights into the nature of dark matter on scales ranging from galaxy clusters, the largest concentrations of mass in the Universe, all the way down to sub-galactic scales, where strong lensing reveals the presence of otherwise-invisible dark matter structures throughout the cosmos.”

The ASX is proud to present a new logo by graphic designer Hansen Jiang, and refined by designer Janine Charoonruk! To craft the ASX’s first logo update since 2003, Hansen took inspiration from elements of the previous logo, while introducing new elements to capture the mission and nature of the ASX with a distinctive mark.

“The shapes, curves, and weight of each stroke invokes design principles of the golden space age, as well as showing movement and dynamics,” wrote Hansen in his branding proposal. “From a distance, it resembles a star. Upon inspection, especially with the inclusion of the red stroke, the points of the star form the letters ASX. Another representation is that of a rocket entering a wormhole, or sonic barrier. As well, in reference to the 2003 logo, the paths reference rocket trajectories.”

“This logo aims to improve upon the past logo by making each letter distinct and stylistically important,” he continued.

Janine then refined the logomark by adding polish. She applied a colour palette of warm tones—the red in the streak and yellow in the stars—and replaced the black background with charcoal black. “The angle of the gradient was also put in a way to make the round logo pop more [and] look 3D-like, like imagining how light would hit a round ball,” she reflected. “This is done by putting a light colour gradient at the upper left area of the circle to emulate that effect.”

Hansen has since completed his term as a Graphic Designer. The ASX team is thankful for his incredible work, and wishes him an amazing future and career. Janine continues to work with the ASX. Her art Instagram, which Hansen encourages all to visit, is at https://www.instagram.com/chickensoupy/. 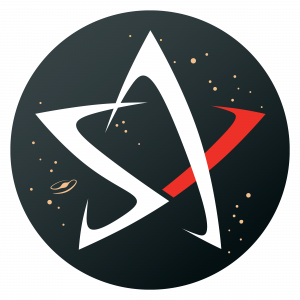