Title: Fossils of the Early Universe
Abstract: Star clusters lie at the cross-roads of star formation, galaxy formation, and galaxy evolution. Stars do not form alone in isolation, but in clustered environments surround by between several tens to several millions of stars. The current star cluster population of a galaxy is made up of newly formed clusters of young stars and old star clusters that formed at the same time as the galaxy itself. These old clusters, often called globular clusters, provide clues as to what a galaxy was like when it first formed and how it has evolved over time. I will discuss what we know about cluster formation and evolution, as well as how we can use clusters as tools to study the galaxy within which they orbit. To help gain an understanding of the present day properties of Galactic clusters, we will also explore what life would be like if our Sun was actually inside a cluster with the help of a virtual reality environment. Not only will the night sky look very different, but the type of science available to astronomers would also change. 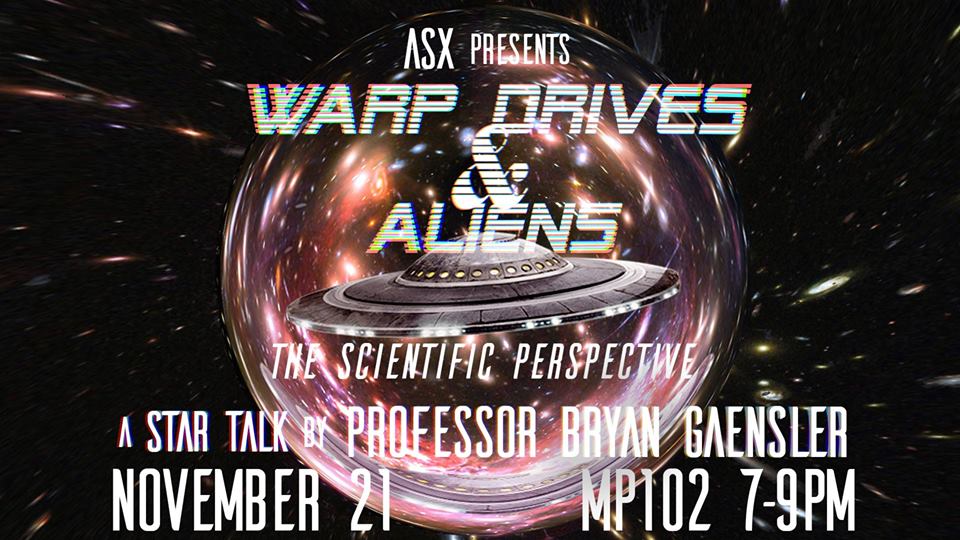 Abstract: Science fiction and science are both wondrous and inspiring, albeit in very different ways. At its best, science fiction asks profound questions about the human condition. In contrast, science asks — and often answers — even more profound questions about the very nature of matter, space and time. I am both a professional astrophysicist and a science-fiction fan, and sometimes my two great passions converge. Specifically, two of the ever-present themes explored in both fact and fiction are the prospect of journeying to other stars, and the possibility of life on other worlds. In this presentation, I will provide an overview of the latest thinking on interstellar travel and on the search for alien life. The remarkable frontiers of current research provide a rich canvas to tell stories of our place in the cosmos.

About the Speaker: This star talk features Dr. Patrick Hall, a Ph.D. graduate in astronomy and astrophysics. Dr. Hall is currently a professor at York University and a contributor to the SAO/NASA Astrophysics Data System. He specializes in quasars and blackholes, particularly in the outflows of gas and light from these active bodies. 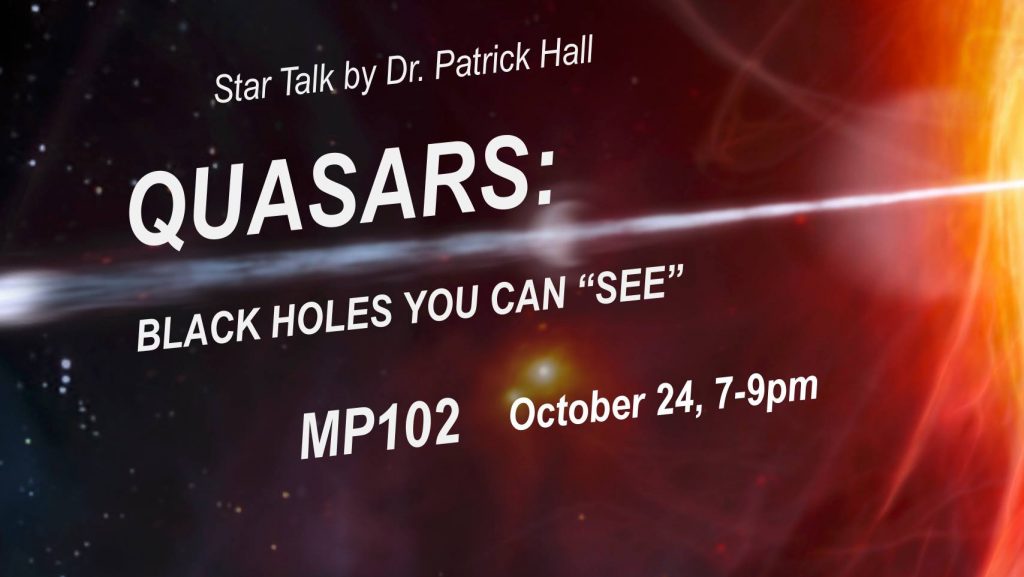 “Quasars – Black Holes You Can ‘See'” with Dr. Patrick Hall

Abstract: Quasars are the brightest objects in our Universe. A quasar is a rotating disk as big as our solar system and hotter than the Sun, formed when matter spirals into a supermassive black hole at the centre of a galaxy. Dr. Hall will discuss these fascinating objects and how they tap the strong gravity of black holes.

About the Speaker: This star talk features Dr. Patrick Hall, a Ph.D. graduate in astronomy and astrophysics. Dr. Hall is currently a professor at York University and a contributor to the SAO/NASA Astrophysics Data System. He specializes in quasars and blackholes, particularly in the outflows of gas and light from these active bodies. 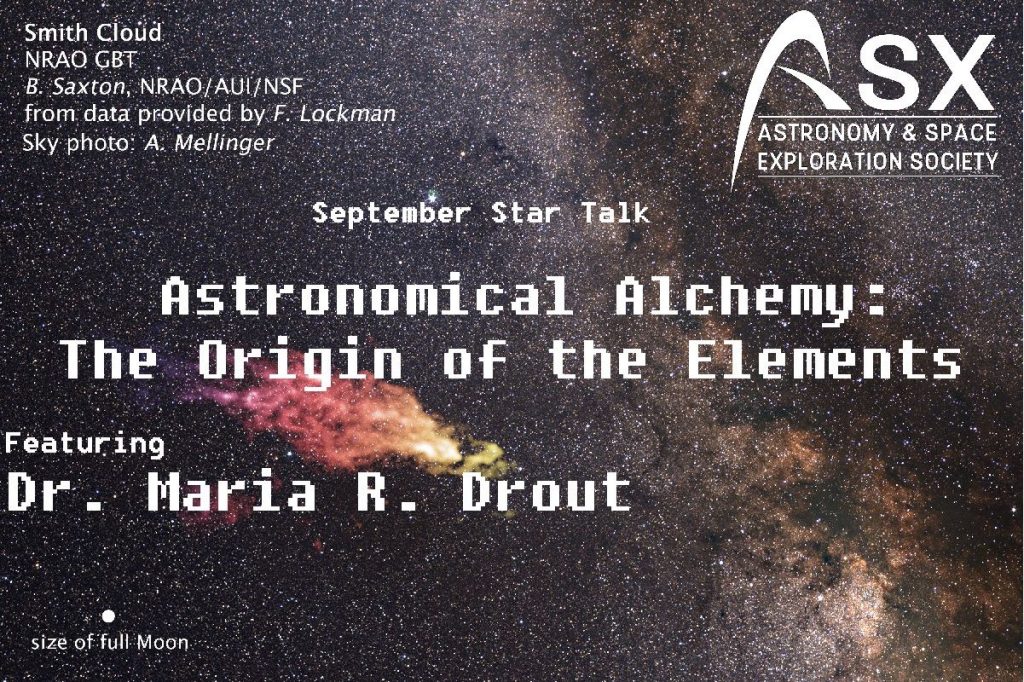 Abstract: As Carl Sagan once said, “We are made of star stuff.” However, each element has its own astronomical origins story. Elements are created everywhere from the centers of stars, to supernovae explosions, to the Big Bang itself. Dr. Drout will take us on a journey through the periodic table, highlighting how our recent discovery of a ‘kilonova’ associated with the cataclysmic merger of two neutron stars has filled in one of the final pieces of the elemental puzzle—the origin of many of the heaviest elements in the universe.

For everyone who was disappointed by our cancelled symposium, Dr. John B. Charles (one of the original symposium speakers) has agreed to come to Toronto to give a special Star Talk!

Light snacks and refreshments will be provided following the talk!

Abstract: So, you want to go to Mars? Long-range planning for exploration-class missions emphasizes the need for anticipating the medical and human factors aspects of such expeditions. Physiological stresses will come from environmental factors such as prolonged exposure to radiation, weightlessness while en route, and low gravity and a toxic atmosphere while on Mars. Psychological stressors will include remoteness from Earth, confinement, and potential interpersonal conflicts, all complicated by circadian alterations. Medical risks including trauma must be considered. The role of such risk-modifying influences as artificial gravity and improved propulsion technologies to shorten round-trip time will also be discussed. NASA’s on-going efforts to reduce the risks to humans on exploration-class missions, including the year-long ISS expedition and its Twins Study, will be presented.

About the speaker: Dr. John B. Charles is the former Chief Scientist at the NASA Human Research Program. Dr. Charles earned his bachelor of science in biophysics at The Ohio State University and his doctorate in physiology and biophysics at the University of Kentucky. He worked at NASA’s Johnson Space centre from 1983 – 2018, where he investigated the cardiovascular effects of space flight on Space Shuttle astronauts and on crew members of the Russian space station Mir. As the chief of the International Science Office of NASA’s Human Research Program, he led space life sciences planning for the joint U.S./Russian one-year mission on the ISS. Additionally, he is a fellow of the Aerospace Medical Association and a full member of the International Academy of Astronautics, has published over 60 scientific articles, and has received several professional awards.