ASX 14th Annual Symposium “What Ifs: Is the Impossible, Possible?”

ASX 14th Annual Symposium “What Ifs: Is the Impossible, Possible?” 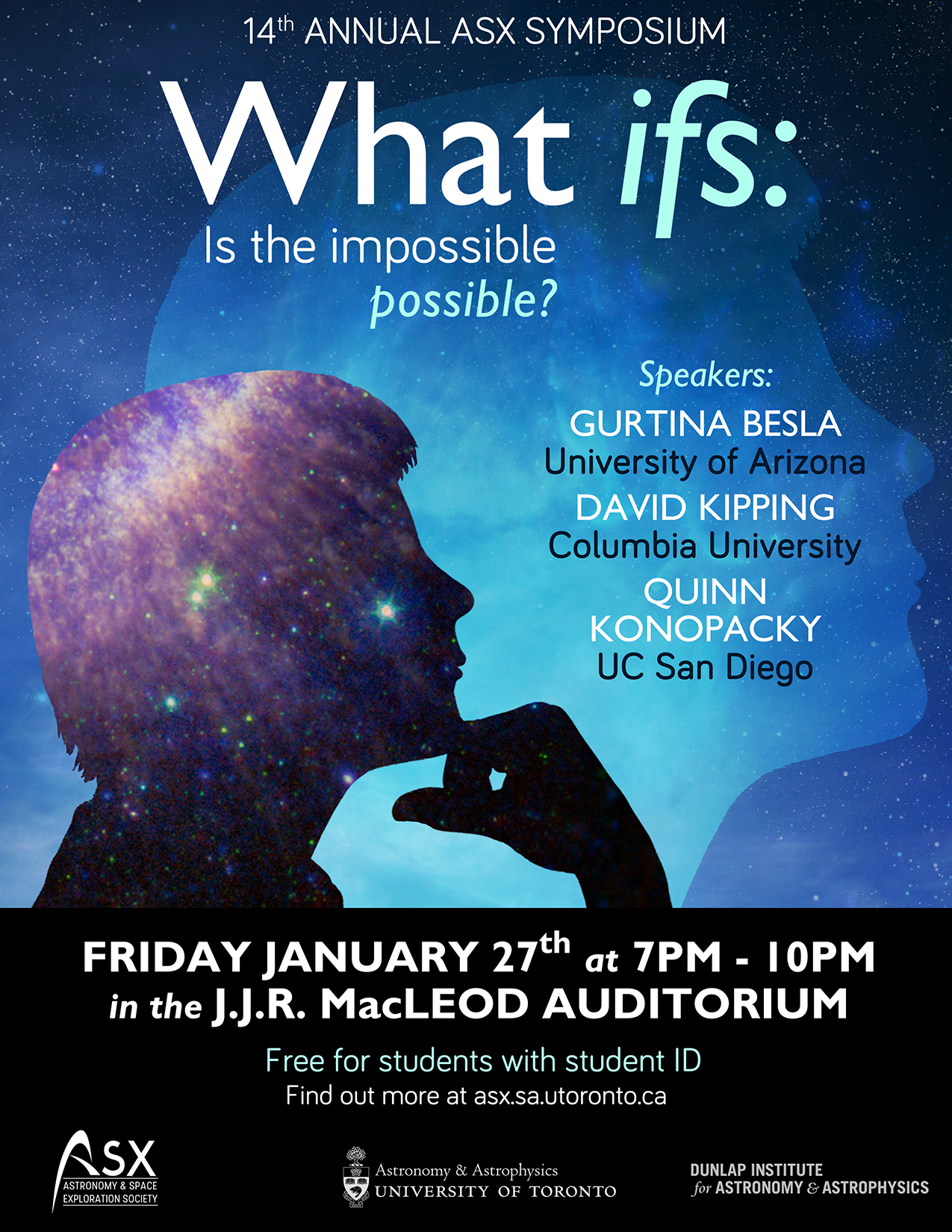 Professor Gurtina Besla
Title: Crash of the Titans: The Future Fate of the Milky Way and Andromeda Galaxies
Abstract: Our Milky Way galaxy and its neighbor, the Andromeda galaxy, are headed on a collision course with an expected impact date of ~3.8 billion years from now. What if we are around to see this cataclysmic event? Recently, we have used the Hubble Space Telescope to make the first direct measurement of the velocity of the Andromeda galaxy, allowing us to create sophisticated computer simulations that enable us to accurately predict the future fate of our Galaxy and visualize the dramatic changes to our night sky. In this talk I will illustrate these results and discuss the implications for life on Earth.

Professor David Kipping
Title: What if we’re alone, what if we’re not?
Abstract: Since at least the ancient Greeks, humanity has asked whether we are alone in the Universe – a question largely confined to philosophical musing and speculation. Modern astronomy has recently discovered thousands of planets beyond our cosmic shore, with the implication that planets of the same size and temperature as the Earth are common throughout our galaxy. For the first time, we are starting to actually constrain key terms which factor into the number of civilizations amongst the stars. But these recent revelations only serve to exacerbate the famous Fermi’s paradox – where is everyone? I’ll first consider the most obvious solution, that we are indeed alone (and exactly how alone). If true, we are either uniquely advanced and poised for galactic conquest, or, soon to face an imminent doom afflicting civilizations such as our own. I’ll explain how future telescopes expected soon could illuminate which is more probable and what it means for the nature of life either way. Alternatively, we may be just another pebble on the beach, and for some reason we cannot see the other pebbles around us. The fact we even exist places limits to the activities of these other civilizations, as does our observations of other stars and galaxies around us. I’ll explain what these limits are and how they could have eluded the gaze of our telescopes to date. Whether we’re alone or not, we are now closing in on the answer at an unprecedented rate with an answer that either way will forever change how we see the Universe around us.

Professor Quinn Konopacky
Title: What if the Sun had a twin?
Abstract: The process by which stars and planets form leads to a number of possible outcomes, giving rise to the vast diversity of planetary systems we have discovered in our galaxy. One common result of this process is the formation of binary stars – that is, two stars that orbit each other just like the planets orbit the Sun. We know that the majority of stars like the Sun have another star orbiting them. In this presentation, I will explore the possibility of what would have happened to our Solar System if the Sun had a stellar twin. Would planets exist at all? What form would the Solar System potentially have? Would the Earth be able to exist in this altered Solar System? Would life have been able to develop on Earth? If so, what would have been our fate over many billions of years of evolution?

Students: FREE from ANY university, college or school with a valid ID (make sure you still reserve a ticket online)
Others: $15