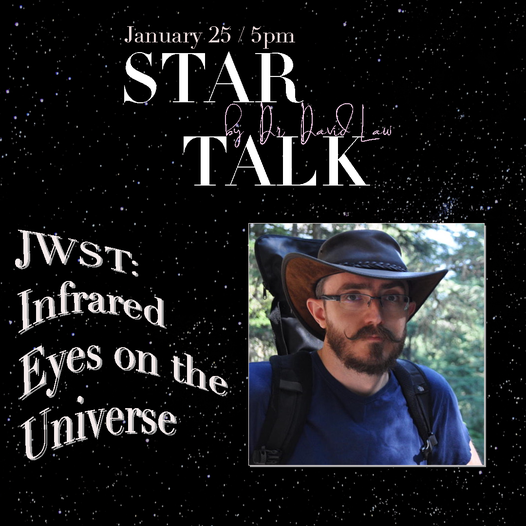 Would you like to learn about the James Webb Telescope? Learn from an expert astronomer on January 25! The guest speaker will be Dr. David Law at the Space Telescope Science Institute. Find the event page at: https://www.facebook.com/events/1083400009112360

Abstract: As the flagship successor to NASA’s Hubble Space Telescope, the James Webb Space Telescope (JWST) will allow us to see further into the universe than ever before. JWST is NASA’s most ambitious and complex space observatory to date, with a large segmented mirror and a host of advanced new technologies. These technologies allow it to operate at infrared wavelengths much longer than those to which Hubble is sensitive, allowing JWST to see through the dust-enshrouded universe and learn about the first stars and the birth of planetary systems. In this talk, Dr. Law will give an overview of the JWST project and preview some of the exciting science that is likely to come from its first year of observations.

Speaker biography: Dr. David Law is an Associate Astronomer at the Space Telescope Science Institute in Baltimore. His research focuses on the evolution of galaxy structure and kinematics from the Local Group to high redshift, with emphasis on optical/IR spectroscopic studies of turbulence and gas outflows in star forming galaxies. Dr. Law is an expert in integral-field spectroscopy and is the lead data scientist for the SDSS-IV MaNGA project which obtained optical integral-field spectroscopy for 10,000 galaxies. At STScI he is a member of the James Webb Space Telescope’s Mid-InfraRed Instrument team (MIRI) and leads the technical development of the MIRI integral field spectrograph. Dr. Law received his PhD in astrophysics from the California Institute of Technology in 2009, and spent time as a Hubble Fellow at UCLA and a Dunlap Fellow at the University of Toronto before joining STScI in 2014.